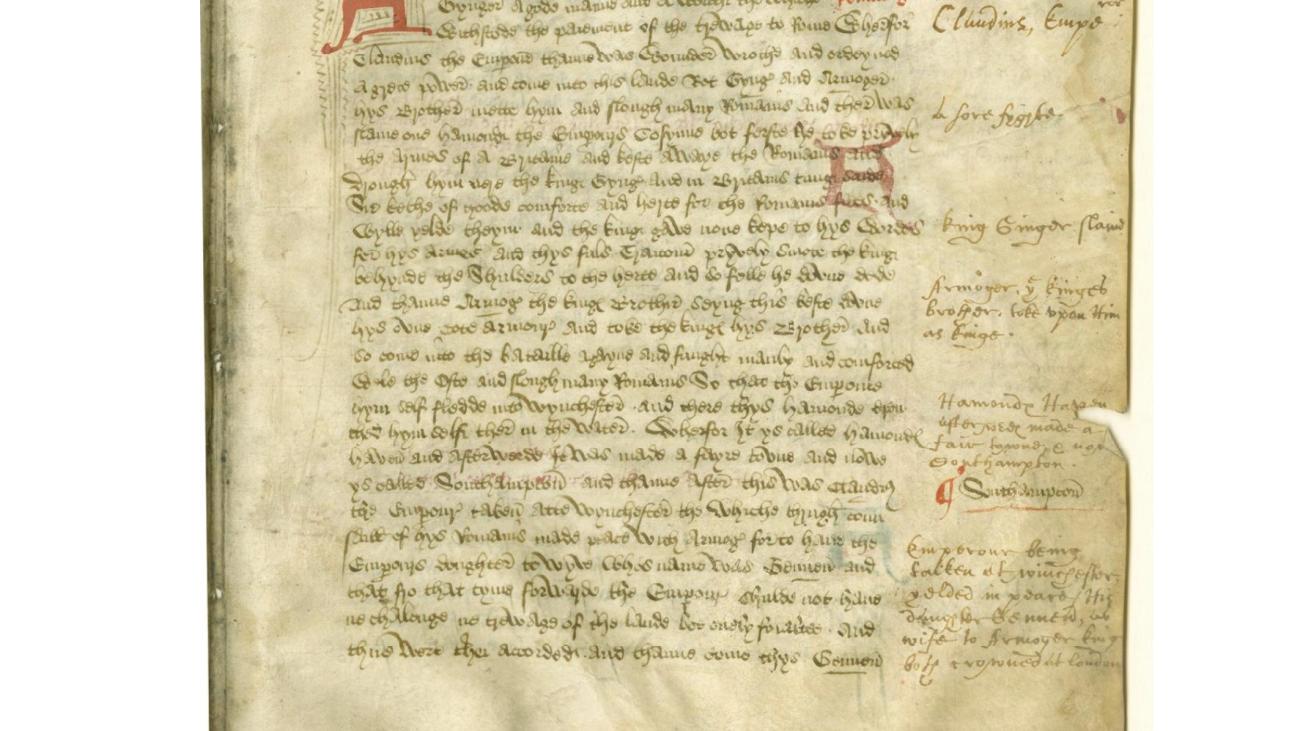 This project is a browseable directory of known copies of the Middle English Prose Brut chronicle, drawn from previous scholarly projects to describe and define the manuscript corpus. It contains links to projects, descriptions, and digital facsimiles of the manuscripts available on the web. A copy of the dataset is freely available for download and further experimentation.

During the later Middle Ages, the Middle English Prose Brut chronicle, commonly referred to as the Prose Brut, was possibly the most common source where a reader could learn about the history of England—from its legendary origins to the present dynasty. The Prose Brut survives in nearly two hundred manuscripts, compiled from the end of the fourteenth century on. This group of manuscripts has been the subject of extensive study for more than a century, as scholars and bibliographers have discovered new manuscripts and studied the Prose Brut’s relationship to other histories across a number of languages.

In the early 2000s, the multiyear digital humanities project “Imagining History: Perspectives on Late Medieval Vernacular Historiography” looked to put this information on the web in an open and expandable format. This most recent work has also been the most precarious. In 2017, the Imagining History Project’s data disappeared from the live internet. The handlist is the result of the project team's work to remix the project data and to combine it with digitally available materials about the remaining manuscripts of the Brut, where possible. Since the project’s authors do not have direct control over much of the information, the project also illustrates the many different ways that institutions preserve data about medieval manuscripts.

This glossary contains brief descriptions of the terminology used in our handlist, as well as our rationale for selecting them. Some of these terms are related to the standard conventions for describing manuscripts and rare books, while others are unique to the needs of our project.

For a more thorough overview of language specific to manuscript description, see Michelle Brown’s Understanding Illuminated Manuscripts: A Guide to Technical Terms (1994). This terminology will be especially helpful when consulting the external resources linked in each item in the handlist.

(Plural: codices) A bound volume containing any number of individual texts sewn along one edge (as opposed to a scroll or a set of tablets). We use this term instead of the more general “manuscript” or “book” to avoid confusion with either an individual manuscript text (such as the Brut), or texts which organize themselves into “books.”

This field follows the standard convention for citing manuscript sources, and is a combination of the codex’s geographic location, holding institution, and item-specific shelfmark within that institution.

The unique designation identifying a codex in its holding institution, used to retrieve that item (similar to a call number system for printed books).

The institutional information about any given manuscript codex that is available on the web, including its shelfmark. There are three main types of record in this field:

Historically, libraries treated the cataloguing of manuscripts separate from their printed book holdings. They compiled printed catalogues of their manuscripts and sent these to other institutions for reference. While some of this information has been migrated into online library catalogues, printed catalogues may still be the only resource that describes a repository’s manuscript holdings at any length. Where no institutional record is available, we have included the citation of the text in Lister Matheson’s The Prose Brut: the Development of a Middle English Chronicle (Tempe, AZ, 1998), as well as a link to the institution’s landing page.

This facet will allow you to browse codices that contain additional texts other than the Prose Brut. It has three values:

This facet allows you to browse the handlist for digitized content that is publicly available. It has three values.

Since these terms describe the whole codex, the “partial” value can range from single leaves to entire texts. Further information about the extent of a digital copy may be available in the Content Notes field.

This facet allows you to browse only the codices that were surveyed as part of the Imagining History Project at Queen's University Belfast (QUB) (2002-2005). It has three values:

This field contains more detailed information about the language, content, and makeup of the codex gathered between 2002 and 2005 by the investigators of the Imagining History Project at Queen’s University Belfast (QUB). They divided their information into two categories: 124 summary (short) descriptions published on the project website, which provide notes on the physical makeup of each codex, their dialects and decorations, and the texts they contain. Eighty of these 124 manuscripts have additional long descriptions. When available, links to the archived Short Descriptions will appear in this field.

This field provides brief information about the entire codex. It is not exhaustive: its purpose is to give those browsing the discovery layer guidance without requiring them to navigate to external sites. Information found in the Content Notes field will cite its source; Articles or monographs referenced will appear in the References field.

Citations to external published sources mentioned in the Content Notes field. This field is not meant to be a comprehensive bibliography for each individual codex, but to provide information that has emerged since the publication of Lister Matheson’s Prose Brut (1998) and the close of the Imagining History Project (2002-2005).