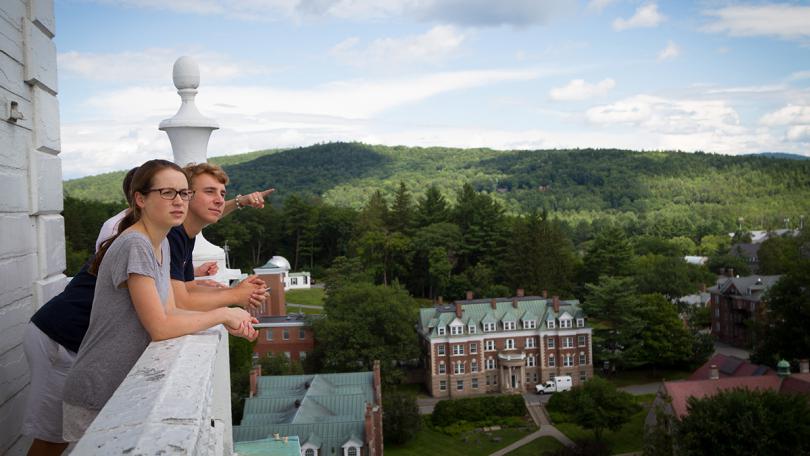 People look out over Dartmouth campus from the Baker-Berry tower

At certain times of the year, we open up the Baker bell tower and allow the Dartmouth community to view the campus from above.

In addition to the annual tower tour events listed above, Baker Library will do its best to accommodate group tour requests.

Ernest Martin Hopkins, Dartmouth College President 1916-1945, Class of 1901, had visited Oxford and Cambridge and was much impressed with the bell-ringing on those campuses. When Baker Library was constructed, a trustee, Clarence B. Little, Class of 1881, donated $40,000 for a set of bells to be placed in the tower of the Library, in order to please President Hopkins.

Meneely Bell Company of Troy, New York custom-built a 15-bell set. The bells vary in size from 200 to 5,300 pounds. They range an octave and a half on the scale, playing every note in that range, except E flat.

The bells first rang in 1928. They were rung manually for the first year. The following year, William Durrschmidt, an instrument maker and Professor of Music, invented an automation system from three machines and a clock. It was similar to the mechanism of a player piano, where holes are punched into a roll of paper and the locations of the holes triggered the bell mechanism. There was also a keyboard in the tower, so people could play "instantaneous music" on the bells.

In 1979, the bells were computerized. Two students designed a system to run the bells, as the system and the paper rolls used for the first 50 years were starting to wear out.

A 16th bell was donated in 1981 in memory of Donal F. Morse '51. Money was also provided for the maintenance of the system and pay for the bell ringer.

The bells currently run via wireless access. An iMac computer in the tower runs custom-designed software written by a graduate student in electro-acoustic music programs.

Bells ring the time on the hour and half hour. Songs are played three times a day - the alma mater at 6pm, and varying pieces during intervals between classes. Songs can be requested by blitzing "Bells". Requests aren't guaranteed, but are most welcome. If you are requesting a song that is already in the song database, it takes a day or two to program it. Songs can be scheduled for any time except on the hour.

Dartmouth College is one of the last few places that still uses real bells instead of recordings or synthesizers. Bells are turned each year so that the hammers don't wear out the same spot on each bell, and we can be guaranteed the enjoyment of these real bells for years to come.

Check out the Office of Alumni Relations for more information.

About the Green Lights

Every now and then, a green light shines from the tower on Baker Library. The green comes from energy efficient green LED lights that shine on the glass windows in the bell tower.

This green light is often referred to as the "money light" because it is lit on occasions that attract College alumni and trustees.

In October 1975, Jack Skewes, then Director of Business Affairs, wrote a memo listing the events during which the "green lantern" would be lit. The same events trigger the green lights today. The memo reads:

The Baker bell tower was restored in the fall of 2016. For more information about this historic preservation project, please see Updating an Icon: The Baker Tower Restoration Project.

While you're visiting, don't miss one of Dartmouth's greatest treasures, José Clemente Orozco's mural, The Epic of American Civilization, created between 1932-1934 while Orozco was in-residence at Dartmouth. Visit during Reserve Room hours, or take a tour offered by the Hood Museum of Art.