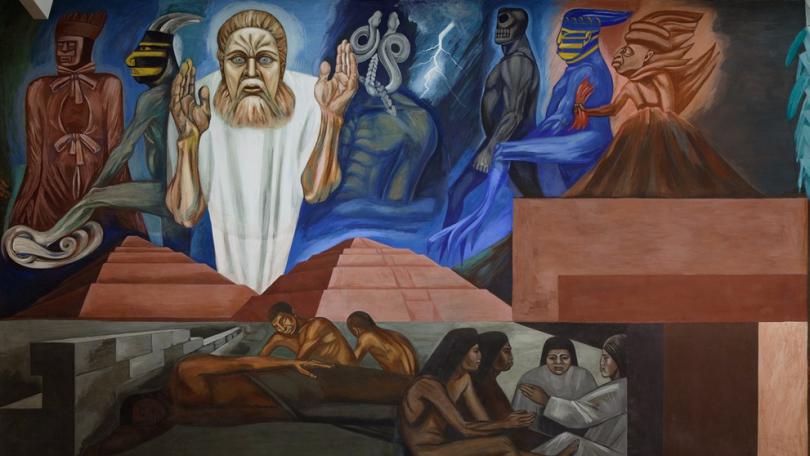 This national historic landmark, The Epic of American Civilization, painted by Mexican artist José Clemente Orozco, is in the basement of the Baker-Berry Library. 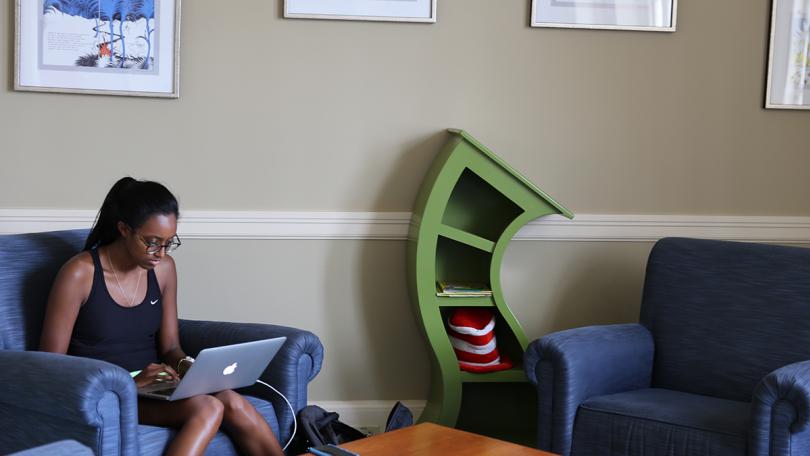 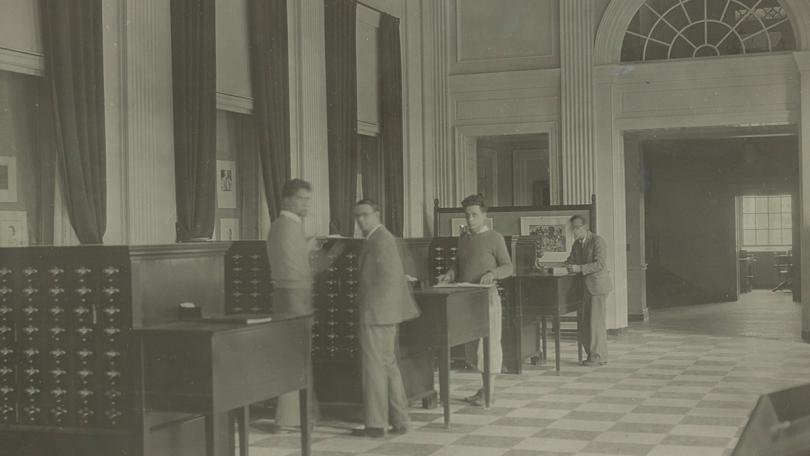 In 1930, Dartmouth students peruse the paper card catalog for books. 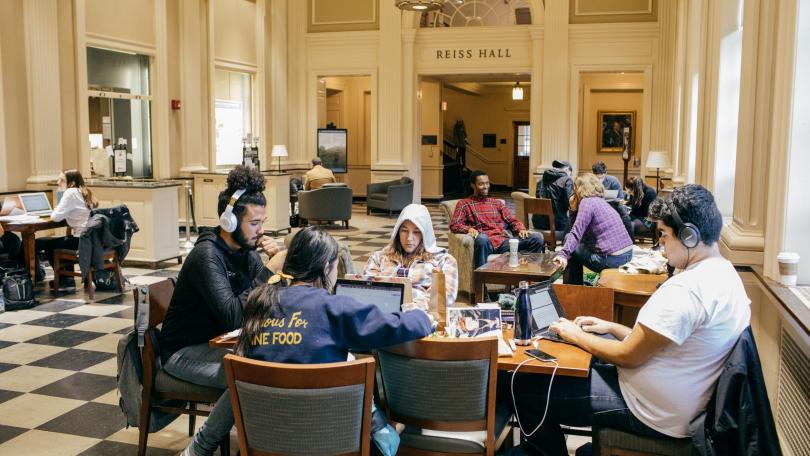 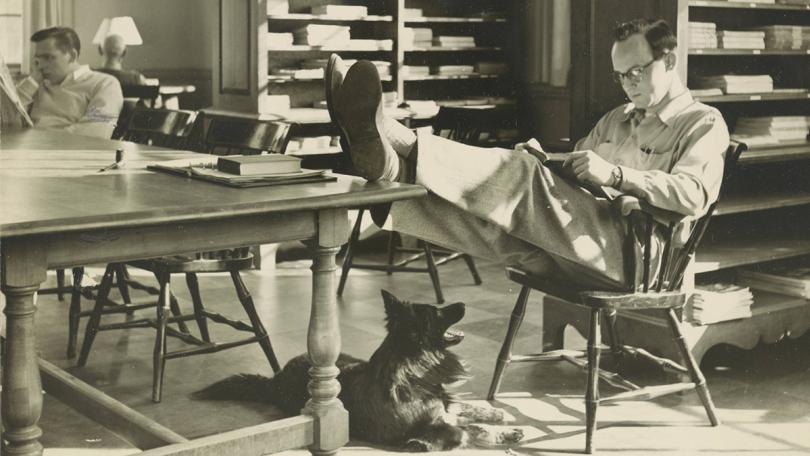 In this undated photo, a student and his best friend enjoy sunlight via the windows of the Baker-Berry Library. 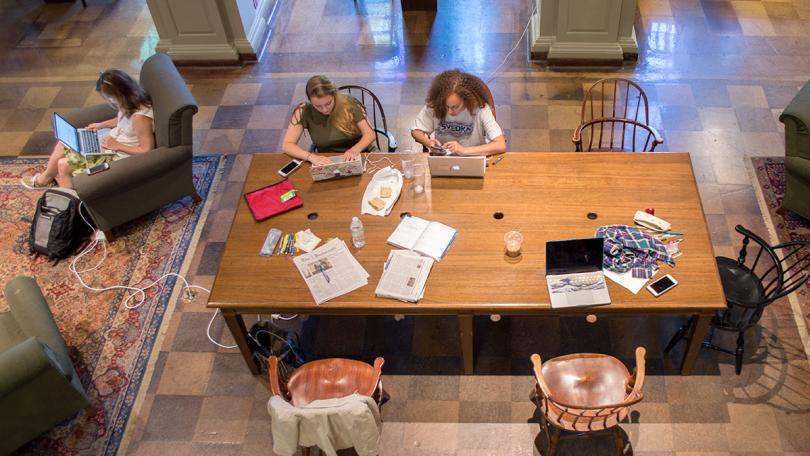 Students study in the East Reading Room in the Dartmouth Library.

The Dartmouth Library has a rich history that began in 1770. Come visit the José Clemente Orozco mural, the Dr. Seuss Room, and more. 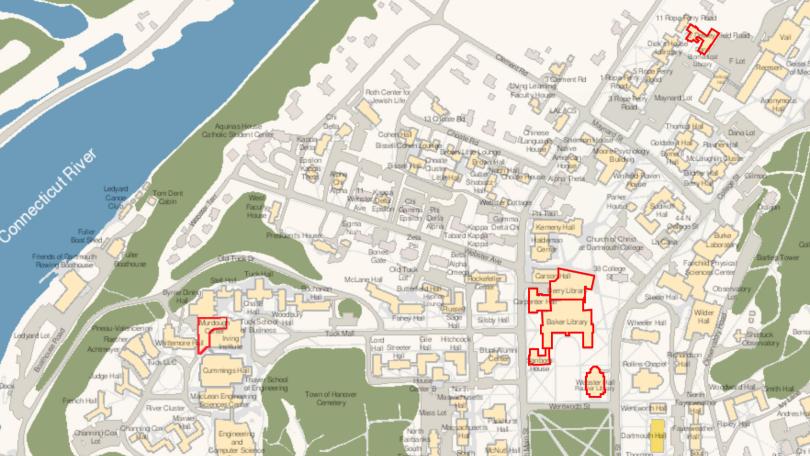 Travel to the Dartmouth Library in Hanover, New Hampshire. 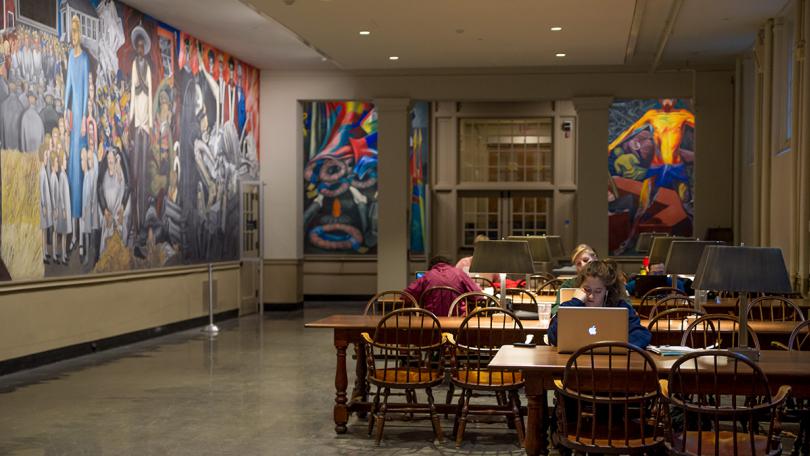 Experience our greatest treasure, the mural by artist José Clemente Orozco. Visit or take a tour! 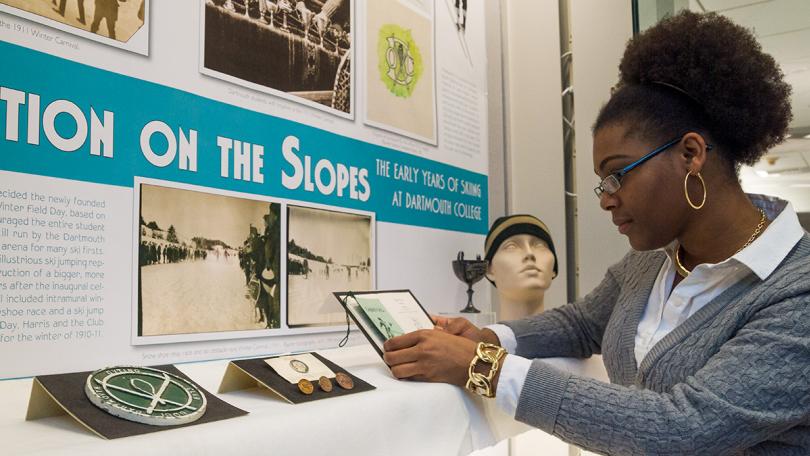 See many of our exhibits that are open to the public.

Join us and learn the historic craft of letterpress printing and hand bookbinding. 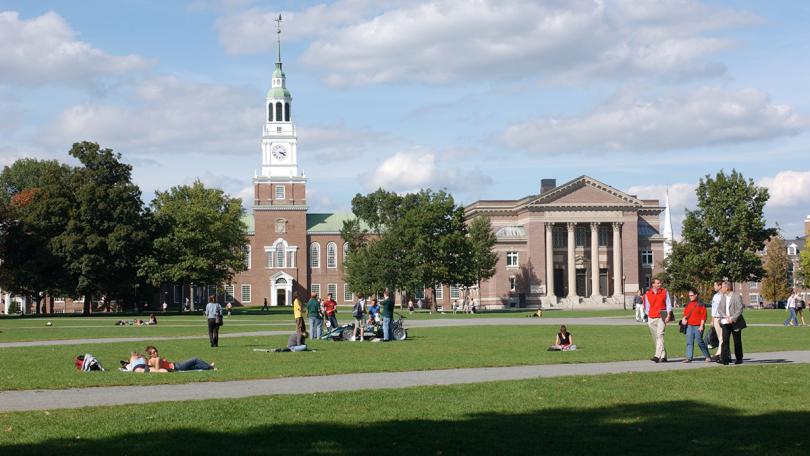 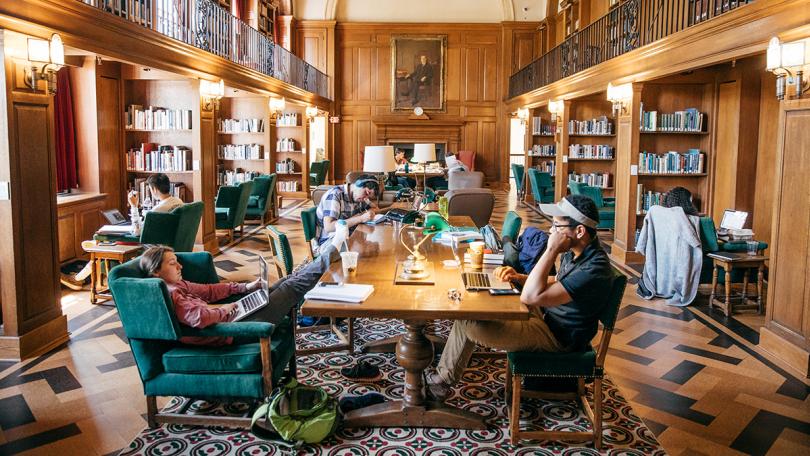 On a sunny day or a snowy evening, the Tower Room offers inspiring views.

The Librarians of Dartmouth College

1770 - Eleazar Wheelock brings his library to Hanover, mostly religious tracts, Bibles, and primers, approximately 300 volumes he had assembled, or received as donations from supporters in England and Scotland, for his work in Moors Indian Charity School.

1773 - The library is housed at Bezaleel Woodward's house, and he is appointed librarian.

1774 - While visiting for Commencement, Jeremy Belknap records in his diary: "The College Library is kept at Mr. Woodward's. It is not large, but there are some very good books in it."

1777 - The library is moved to a College building

1779 - John Smith appointed librarian. Use of the library restricted to officers and students of the College, and resident graduates. The availability of the collection is limited: 1 - 2 p.m. on Monday and Tuesday.

The two literary societies maintain their own libraries, volumes of more practical use than the College library, and with significantly more availability to undergraduate members. For many years, the literary societies' libraries would be the primary source of books for students and faculty alike.

1791 - Dartmouth Hall is completed. Middle room of the first floor set aside for the Library

1802 - The collection numbers approximately 3,000 volumes, many of which are duplicates and of little practical use to the students and faculty. Library hours are very restricted: 1 hour per class every other week, with no more than 5 students in the library at one time. No one is permitted to take a book down from the shelves without permission of the librarian. A use fee of $1.50 per year is assessed from each student, one quarter of which goes to the librarian. Circulation is limited to one volume at a time for freshmen, two for sophomores and juniors, and three for seniors.

1809 - The first printed catalog of the Dartmouth College library is issued.

1817 - In the middle of the difficulties between the State of New Hampshire and the College, the literary societies decide to move their libraries, each numbering about 2,000 volumes, from their location in a building currently held by Dartmouth University, to rooms under the Societies' control. In attempting to seize the books before they could be removed, officers and agents of the University break into the Society library and are set upon by a group of students defending their property. The University forces realize they are outnumbered and withdraw. Ultimately, both sides press charges, both students and University faculty are arrested, but an agreement is reached before the matter comes to trial. Rufus Choate is among the students involved in the "riot".

1840 - Reed Hall completed and the library is moved there.

1852 - George Shattuck gives $2,000 and Roswell Shurtleff gives $1,000 for the acquisition of books for the College library, both with the stipulation that no undergraduate be allowed to withdraw books purchased from the funds.

1859 - In the Librarian's report to the President, Oliver Hubbard states that the library has been closed to students all term, except on special order of a professor. Hubbard believes that giving free access to undergraduates is unworkable.

1864 - The library is open one and a half hours a day; funding for a newspapers and periodical room is approved by the Trustees.

1870 - Librarian Edwin Sanborn notes that the library contains no books on American literature, nothing illustrative of College history, and, furthermore, states that it is high time something be done to rescue the history of the College from oblivion. He recommends an annual appropriation of $1,000 for the purchase of books.

1874 - The literary societies agree to combine their libraries with the College library under one administrative head. In return, the Trustees approve the appointment of a full-time librarian; library hours are to be several hours a day; a certain amount of money to be set aside for purchase of books in part selected by the undergraduates; a uniform library use fee ($6.00) to be collected from all students to constitute a fund for maintaining the reading room. This agreement remained in place until 1904 when the societies disbanded and full title to their libraries was transferred to the College.

1885 - Wilson Hall is completed, the first building on campus constructed specifically to house the College Library and large enough to accommodate 150,000 volumes; the collection stands at 60,000 volumes. The cost is $67,000. The shelving arrives barely in time for the Commencement opening. The students move the library's holding in 3 days.

1920's - Rival institutions joke that Dartmouth is the only college among its peers that has a larger gymnasium than it does a library. However, by the end of the 1920's, with major gifts from two donors (George Baker and Edwin W. Sanborn) , Dartmouth in 1928 has one of the best endowed and well- housed research libraries in the country.

1928 - Baker Library opens. Designed by Jens Frederick Larson, the building is funded by a gift of George Fisher Baker and named in memory of his uncle, Fisher Ames Baker, Class of 1859. The collection numbers 240,000 volumes; the building will accommodate 500,000 volumes. The move from Wilson Hall, and from storage in the basement of New Hampshire Hall, is accomplished at the rate of 15,000 volumes per day.

1938 - Friends of the Dartmouth College Library is established. Their purpose is the acquisition of rare single volumes or collections, manuscripts, etc. anything outside the normal collection scheme for general library funds.

1941 - Thirteen years after its completion, Baker is expanded with a four- story stack annex. Additional capacity is nearly 500,000 volumes

1957 - East courtyard of Baker is filled in to house the bindery and cataloging depts.

1970 - The Dartmouth College Library ceremonially adds its 1 millionth volume to the collection: The Tenth Muse, by Anne Bradstreet. The northwest courtyard between Baker and Carpenter Hall is filled in for the art library, renamed the Sherman Art Library, and a workroom for Special Collections.

1974 - Feldberg Library (business and engineering) opens, combining the Thayer and Tuck libraries under one roof in the new Murdough Center.

1994 - The Library adds its 2 millionth acquisition, The Sine Collection of British illustrated Books. It has taken the Library 200 years to achieve its first million volumes, and a mere 24 years to double the collection.

1996 - Bruce V. '78 and Diana Rauner give $5 million for the renovation of Webster Hall to house Special Collections.

2021 - Kresge Physical Sciences Library and Paddock Music Library collections and services are relocated to Baker-Berry Library from Fairchild Physical Sciences Center and the Hopkins Center for the Performing Arts.